MCL (Mantle Cell Lymphoma) is a human B cell tumor characterized by the overexpression of CyclinD1. Further mutations are necessary for onset of lymphomagenesis. We propose to perform a transposon insertional mutagenesis screen in mice already carrying mutations acting either early or late in MCL lymphomagenesis. The project aims to dissect the evolution of human MCL and to identify new lymphoma driver genes.

To perform genome wide insertional mutagenesis in transgenic mice the PiggyBac transposon from the cabbage looper moth (Trichoplusia ni) was introduced into the mouse genome. To direct insertional mutagenesis to different cell types, we generated mice that express the PB transposase conditionally from the rosa26 locus (RosaLSL-PB mice). In these animals transposase expression can be directed to any cell type by using appropriate Cre-lines. A second mouse strain (ATP-S1) harbours the transposon. Transposons were engineered to elicit loss and/or gain-of-function mutations depending on the location and orientation of their integration. RosaLSL-PB and ATP-S1 mice will be intercrossed with B cell specific Cre-lines to generate animals in which the transposase mobilizes transposons to perform random mutagenesis in B cells. Sequencing of transposon insertions sites in PB-induced lymphomas will reveal novel genes, microRNAs and non-coding genomic regions with regulatory elements involved in lymphomagenesis. 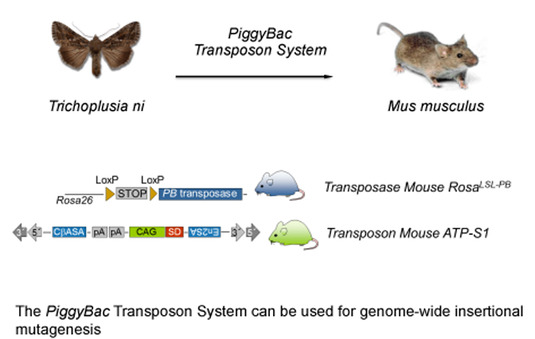